OXygen Has A Cost!

A tree provides a value of 27,40,35,524 BDT (23,72,50,000 rupees or 277,1194 $) only for the production of oXygen per year, in comparison with the cost of portable oxygen cylinders, quantified by Delhi Greens at 2013. Tree, it’s the only source on this planet earth to get oXygen to breathe and survive. We, the Homo sapiens, are the reason to cause an ultimate deficiency of oXygen for our next generations, as we are contributing to climate change. On the other hand, the pandemic, COVID-19, shows to us by putting fingers on our eyes that how much value oXygen could have!

In Bangladesh, we are on the way to become a developed country within 2041, and we are having lots of development across the country. But, we are not concerned enough about the existing natural environment that we have, and we are destroying them. We are cutting millions of trees that are celebrating their 100th years of life span, diminishing forests for the development projects and to provide settlement for the people. But, we are not giving any sort of value to the necessities of a tree or it’s immense value. We are not thinking about the disease outbreaks that might take place in the near future because of the pollutants that are released and will be released into the environment.

If we don't take the lessons from the COVID-19 pandemic, we will have to suffer again. Maybe, we are thinking that we will restore our ecosystem later, after completing the development projects. But, the fact is bitter. Because, it’s not a game where after finishing one game we could think about the better performance in the next game. There’s no next or later. We must think now, and take action now. Otherwise, we need to pay which could be devastating. Because, you know, oXygen has a cost! So, that one tree, a portion of a forest, the natural environment, they also have a cost.

This event in Bangladesh will help the people from all occupancy, from farmers to corporates, parents to teachers, students to policymakers to think about the role that s/he has as a human being to play right now to create a healthier and happier planet earth in future, where climate change word will not be a concern anymore. 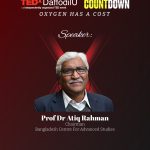 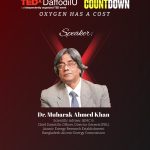 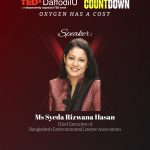 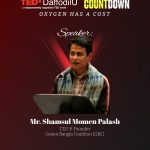 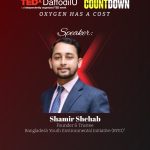 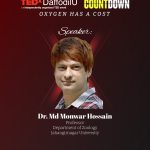